The Rutland Railroad Island Line and Beyond

The end of the 19th Century was a time of great change and opportunity for Vermont's Railroads.  The State's largest railroad, the Vermont Central, was ending its leases of both the Rutland Railroad and the Ogdensburg and Lake Champlain Railroad (in northern New York State.)
The Rutland had a new member on its Board of Directors, William Seward Webb, who had family and financial ties to the Vanderbilts and the New York Central RR.  At this time, the Rutland only went from Bellows Falls to Burlington.  The Rutland needed a northern outlet to allow it to stay financially viable. The New York Central interests could provide needed backing to expand the line!  Dr. Webb would assume the presidency of the Rutland in 1902.
A plan was formed to create two new railroads, the Rutland & Canadian and the Rutland & Noyan. The Rutland & Canadian would lay tracks from Burlington to Alburgh and then, connect with the O&LCRR at Rouses Point, NY.  The Rutland & Noyan line would be built from Alburgh to Noyan Junction. to access Montreal via the Canadian National Railway.  This was a common practice at the time. Existing railroads would form new corporate entities to build new lines and then absorb them after the construction was completed. 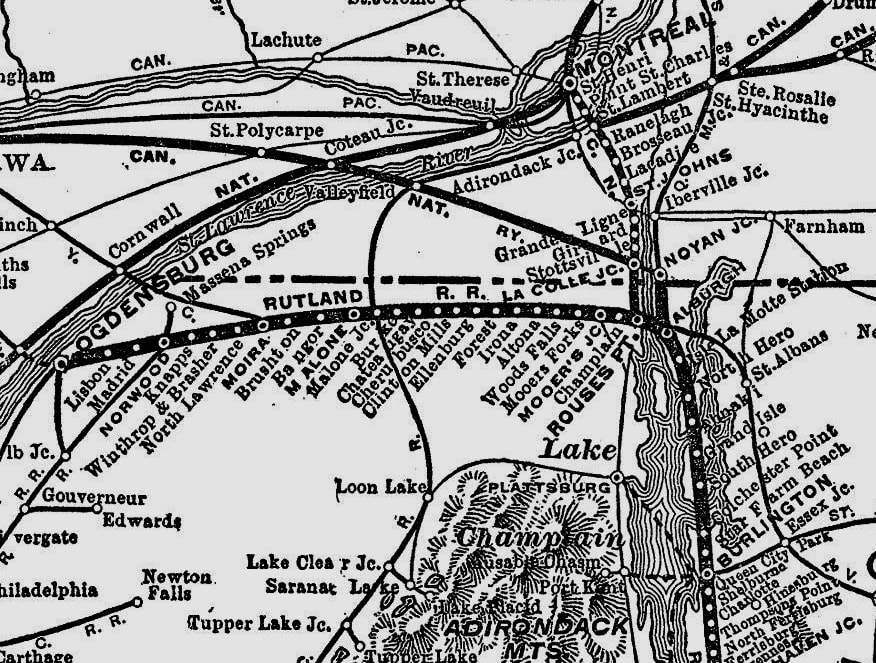 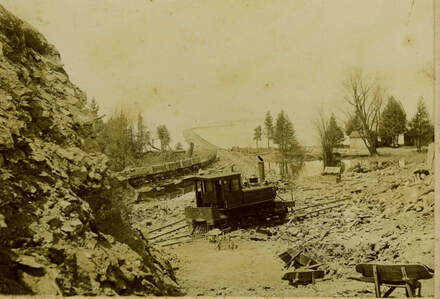 Construction of the Rutland-Canadian Railroad from Colchester, Vermont out on Lake Champlain to South Hero Island, using marble rip-rap. A very small locomotive says "O'Brien and Sheehan Contractors" on the side and there are temporary tracks running out to the causeway in the distance. Middlebury College Digital Archive
Work was completed quickly using 500 Italian immigrants and local laborers to build the line.  A causeway from Colchester to South Hero across Lake Champlain was built by creating a roadbed "fill" that was lined with “riprap” marble blocks to protect it from the lake's waves.  It was a unique form of construction that offered magnificent views of Lake Champlain and its surrounding mountains!  The construction continued north through the Champlain Islands using additional marble protected causeways.  Swing draw bridges were located in the middle of each segment to keep boat traffic open.  Once the line reached Alburgh, it proceeded across Lake Champlain on a wooden trestle with another large swing draw bridge to the town of Rouses Point, NY and the Odgensburg and Lake Champlain RR.  This trestle and bridge between New York and Vermont were co-owned by the Rutland and the Central Vermont RR (Reorganized under a new name).  The Rutland then purchased the O&LC to form one continuous line from Bellows Falls to Odgensburg and the St Lawrence. Included in the purchase was the Ogdensburg Transit Company that owned a fleet of ships to allow access to Chicago. This company was reorganized as the Rutland Transit Company.  These were exciting times for the Rutland Railroad and Vermont!  The Rutland System formed a connection from Boston via the B&MRR at Bellows Falls all the way to the Great Lakes and Chicago! 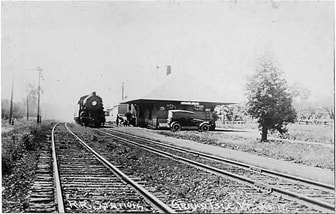 Railroad station in Grand Isle, Vermont, with locomotive on tracks and automobile next to the station. Middlebury College Digital Archive
The Rutland Railroad in the years from 1900 to 1961 was far more than a means of transportation in the Champlain Islands.  It was truly a way of life for so many residents.  The islanders used the railroad to go to high school, church, and shopping. Many island residents found work as station agents, bridge tenders, and shop workers in Alburgh.  The trains brought mail, newspapers, and campers.  Farms used the railroad to ship milk, beans, and apples. 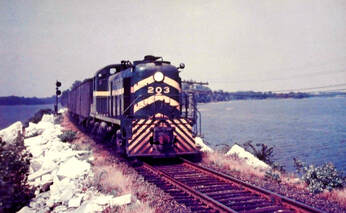 Rutland RS-3 crosses the Champlain Island causeway pulling the milk train. Tom Stewart photo 1950's
When the whistles and horns fell silent, it must have left a deep void in the lives of island residents.  One only has to look at Alburgh from 1940 to 1960, when it lost 30% of its population, to understand the impact. ​No one event or factor caused the line’s demise in 1961.  Over the years a number of road blocks hurt the Rutland’s viability.  The Panama Canal Act, passed in 1915, forced the railroad to divest itself of its Great Lake ships.  New York State legislation ended the flow of Vermont milk into its markets.  Competition from cars, trucks, buses and other railroads also served to reduce revenues.  Real Estate interests in Rutland, wanting to use the railroad's property for downtown Rutland shopping, added additional pressures.  Inflexible work rules prevented management from simplifying operations to save revenue.  In the end the Rutland Railway could not make the transition from a Class 1 railroad to a rural line. 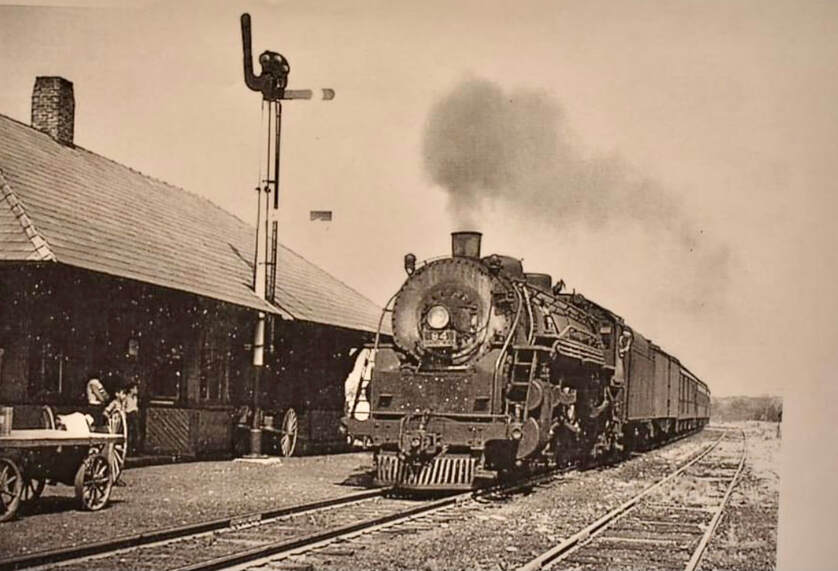 The Green Mountain Flyer at Grand Island
The Island Line would have made one of the most beautiful tourist railroads bringing sightseers from all over the world!  Many Vermonters regret not preserving the line.  Fortunately a portion of the line can still be enjoyed by cyclists and hikers today. It is wonderful to bike across the causeway and take the bike ferry to continue to South Hero or Burlington!  A dream would be to see the whole line rebuilt offering a continuous trail from Burlington to Canada (with railroad tracks along side of course!) 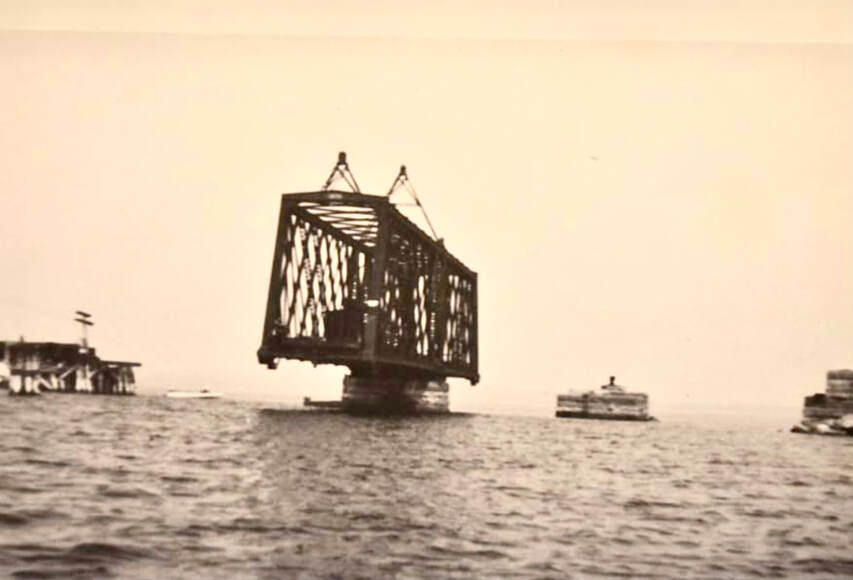 Timeline of the Island Line and the Odgensburg Division 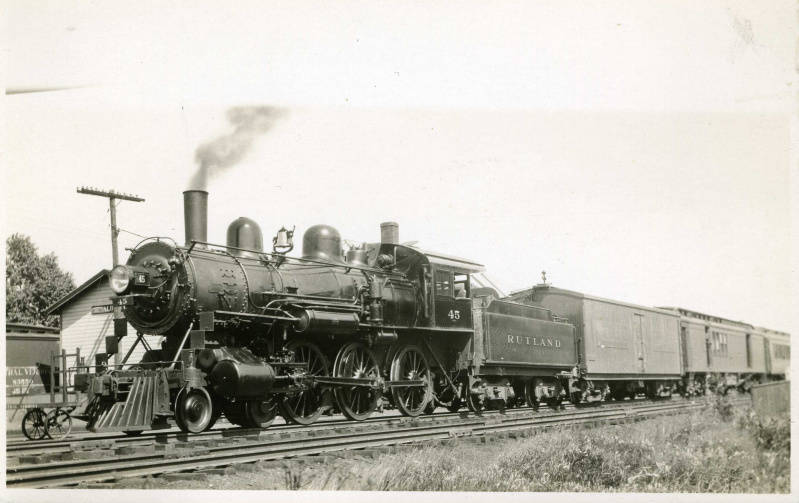 Rutland Railroad steam locomotive 45 with tender with a milk refrigerator car and combination car at the Alburg railroad station. There is a baggage cart on the platform and a Central Vermont car on tracks on the other side of the station. The train is west bound and will soon be on the trestle to Rouses Point, New York. Middlebury College Digital Archive

On any given day, island residents could watch up to 10 trains go by.  Some of the train numbers changed or were eliminated especially in the ‘60’s, but there was always plenty of railroad action.  Each train has 2 numbers denoting travel in opposite directions.